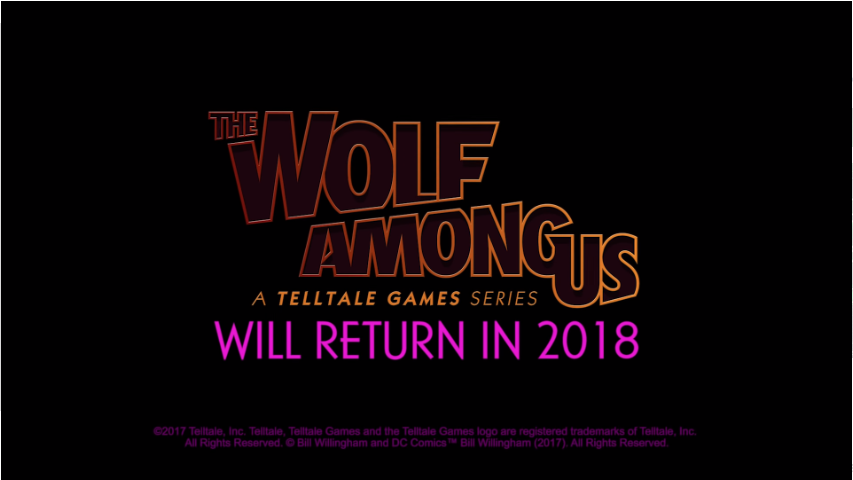 The recent saga behind Telltale’s majority studio closure is one that is unfortunately on a multitude of layers. While the most unfortunate issue to come out the closure is the 225 employees who were let go from the studio, fans are sad to see many of their favorite series all but disappear into the dark abyss as well. One fan-favorite series that was set to make a second season return was The Wolf Among Us, the critically-acclaimed adaptation of Bill Willingham’s Fables series. The first season, which began it’s wave of episodic releases in October 2013, was praised for its strong narrative focus along with its unique setting and diverse cast of fairy tale characters.

Since its final episodic release in July 2014, fans had been clamoring to return to the town of Fabletown to continue Bigby Wolf’s story, and it looked like their wish might have been granted. In July 2017, the staff at Telltale Games released a announcement trailer stating that a second season to the cult-followed series has entered production, aiming for a 2018 release date, though that date would be bumped into 2019 due to ‘internal studio issue’. These issues then came to light when the studio closer began in September 2018, officially cancelling all projects Telltale currently had in production.

With the studio having over a year of production under their belt on the project, many fans possibly thought the series could see the same treatment The Walking Dead‘s final season saw with production being picked up by Skybound Games. Unfortunately, the status on season two was much bleaker than many expected it to be. In a recent deep-dive piece on Telltale Game’s final year by EuroGamer, it was discovered that not only had the project barely gotten underway, but the team tackling it was extremely small with a ‘shoe-string budget, even by Telltale standards’.

“Everyone knew Wolf 1 was a critical success, but not a commercial one”, an ex-staff member on the project’s development team told  EuroGamer. “I think people came into it realizing they were making a boutique product. At one point, the season was going to be three episode.” The site also discovered that proper development for the second season of the Fables-inspired series didn’t begin until the summer of 2017, not long before their July announcement trailer released. While many public figures within the company stood by their original 2018 release window and the affirmative attitude on the series’s return, much of the team internally doubted the project’s long-term legitimacy. A source told EuroGamer “Even when the marketing team recorded the Wolf 2 announcement trailer, many people within the studio doubted it would ever see the light of day.”

The deep-dive digs a bit deeper to confirm many beliefs within the industry since the fall of Telltale games: the game had truly never left early development. One artist on the project explained “It was so early on (in development) that we didn’t have much apart from some concept art and a bit of white boxing for gameplay prototyping.” While the dark development of the game left a scar on many who were associated, it does seem that an overview of the season, and the majority of the first episodes scripted were complete; stating the game wasn’t going to be a direct sequel, but it would follow the events of Bigby and Snow White chronologically after the first season’s events.

While it doesn’t look like we will be seeing Bigby Wolf return to our screens in a new entry to the series, it will be interesting to see what happens to many of the intellectual properties that Telltale owned as they begin liquidating many of their assets. If we are lucky, maybe we will see the abrasive Big Bad Wolf make his return one day. In the meantime, the first season of The Wolf Among Us is still available for purchase on all major platforms.